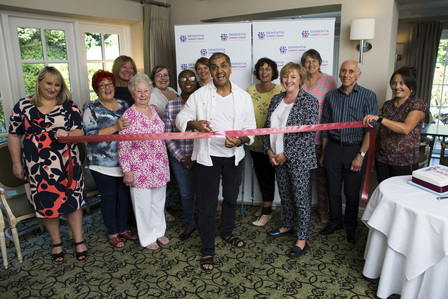 The Royal Surgical Aid Society announced this week that it has rebranded as ‘Dementia Carers Count’. At the charity’s 150th anniversary the decision was taken to focus on family carers of people with dementia, who often receive little support at a time in their life when it can be most needed.

Dementia Carers Count (DCC) has already piloted a raft of practical courses attended by husbands, wives, partners, daughters, sons, daughters-in-law, sons-in-law and grandchildren, spanning ages from 18 to 79 years. As well helping them to better understand the person they care for and to build skills and confidence to see them through the ups and downs that caring can bring, carers have the opportunity to meet, connect and share the load with others experiencing similar challenges.

Carers who have taken part in DCC’s pilot courses are unanimous in their support for what the charity is doing.

‘The course did me so much good – I am still feeling calm and relaxed…this is probably the best I have felt in years. It’s funny how a few days can be so transformative.’ Sarah Churchill, carer. Alongside the rebrand and at the heart of DCC’s vision will be its flagship Dementia Carers Centre, where its expert-led courses and services will be housed in the future.

Claire Goodchild, CEO of Dementia Carers Count said, ‘I’m excited about the innovative work that DCC is leading, and about the wonderful feedback we’ve had from carers so far. Incredibly, there are 700,000 unpaid family carers of people with dementia in the UK. Carers are at the core of what we do and why we exist; it’s vital that we listen to them and support them to feel confident and recognised in their extremely valuable role. Our Dementia Carers Centre will cement everything together, as a unique place where carers can drop their shoulders and relax whilst learning and re-charging their batteries.’

The new name was launched in Birmingham by a group of carers attending the most recent DCC course: Eirwen Greves from Sutton Coldfield assisted with the celebratory cake cutting and Kush Parmar from Birmingham with the ribbon cutting to unveil the new logo.

DCC is also creating a specialist research unit to investigate family carers’ needs, experiences and desired outcomes. In turn, this research will support campaigns to influence policy and raise public awareness about family carers of people with dementia.