Act on dementia cic provides advice, information and emotional support to family carers who support people living with dementia in Solihull. Our aim is that family carers will never be left feeling unsupported and adrift, in what feels like the tornado of dementia. We offer peer support from other trained family carers, who know whats needed and the emotional and physical exhaustion that drains a persons spirit caring long term for people with dementia. Knowledge building amongst family carers helps on so many levels, and spills out into the community. We encourage working in partnership with others, integration on all levels is the best way to work, we should all share best practice, and come together to brain storm and innovate. We are all spokes in a bigger wheel. 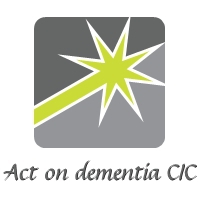 Act on dementia cic are lottery funded and have to rely on others with buildings to allow us a space to operate from. Most of what we do is face to face support and we have 4 different venues across Solihull in which to engage with family carers of people with dementia.We are brand new and started opperating in February 2016.

We do have referrals from Alzheimers, so can do some support via phone calls and emails initially. We go to speak to the organisations where carers go, and leave posters and flyers for our venues, we try to work really closely with health and social care, so they can sign post carers to us.

It’s really important that we reach out to as many family carers as we can, we have immediate rapport with family carers because we are also family carers, and do what they do every day.

2. What are the challenges to delivering these outcomes from the perspective of your organisation?

The line between being a husband, wife, mother, father, daughter, son, and a carer is a fine line, that does and will get crossed when the person has dementia. It’s getting the person that cares to recognise that, then do something about it when its not their top priority.

The stigma around dementia means that people may not always want others to know that a family member has dementia as it means losing life style and friends. They would rather stuggle until they fall from carer burn out, which causes its own problems.

This is where being a family carer really helps as other family carers will open up to us, and they wouldn’t with other professionals.