Registered as a Dementia Friendly Community 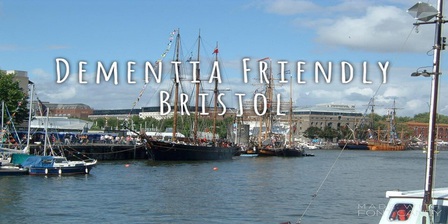 Bristol DAA was launched on 9th July 2013 following a public meeting asking the question “Is Bristol a Dementia Friendly City?”We decided to use the Purple Angel Campaign as introduced by Norms MacNamara of Torbay Dementia Action Alliance as our delivery tool.

The format and content of this meeting formed the basis for roadshow, which we  take to strategic places in the city enabling everyone to be included.

We also use Dementia Friends, an Alzheimer's Society initiative.

Our aim is to enable Bristol to become “The Dementia Friendly City of the UK” by :-

• running stalls at local markets,fairs,boot sales and other events

• helping people to link up with organisations offering help and support to people with Dementia and their carers.

• Working shoulder to shoulder with any group,organisation or individual seeking to help or support those people with Dementia and their carers.

The group is chaired by Tony Hall – who is also carer for his wife Barbara who has had Frontal Temporal Dementia since 1999 and a steering group.

Apart from the annual meeting, others are called as and when required with our focus on actions.,

In order to increase Dementia awareness, BDAA has undertaken projects as per our action plan, plus

· Campaigning for better care, activities and entertainment in care homes for people with dementia.

· Continuing to promote awareness both in UK and abroad.

· Working together with and alongside other Dementia care organisations and groups e.g Alzheimer’s Society, BRACE, Carer’s Support Group etc.

We have:-
· enabled over 700 small independent retailers to become Purple Angels having made their staff Dementia Aware using our “Guide to Understanding Dementia” guide.

· supported the launch of other DAAs

· reached out to schools

· Supported carers and people with dementia and supply assistance in all areas where possible.