They meet on a bi monthly basis to review progress & determine the scope for future projects.

How to join the Tamworth Dementia Friendly Community:

To complete and submit your action plan please visit the 'join the community' page here. Organisations should use the contact details below to seek guidance or assistance.

Click on the link above to find a series of events designed to help those living with dementia residing, or visiting, the Tamworth Community

Community Together CIC organised  a "communknity knitting event" at their Hub in Tamworth Castle Grounds on Saturday 25th May.

The "communiknitty event, was inspired by Malvern Dementia Action Alliance, & included knitting hundreds of "forget me not" flowers ( the symbol of The Alzheimer's Society & the Dementia Friends initiative).

The late Debbie Bates led keen knitters to create the flowers for the Alzheimer Society’s Dementia Friends campaign which aims to transform the way the nation thinks, talks and acts about the condition.

We are encouraging people to find a knitted flower and become a Dementia Friend by attending one of the free sessions detailed on it. 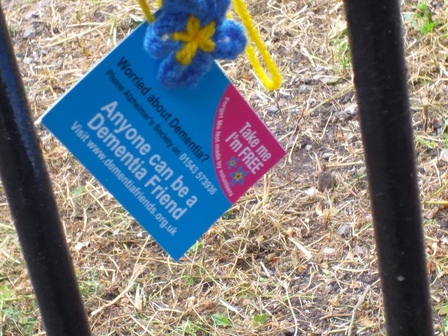 Help us to understand the impacts of dementia 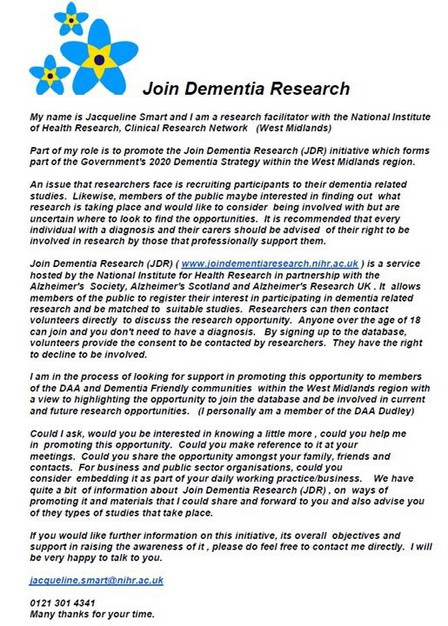 When five people were diagnosed with dementia, it started an outstanding friendship.

The five were invited to attend a ’cognitive stimulation’ programme ran by the Memory Clinic, the leader being Arun Sahota.

While the five were recalling music and places they liked and many other subjects over 12 hour and a half sessions, their spouses all went off and had a cup of tea and chatted and this developed into an unofficial support group.

At the end of the programme the ten decided they would like to keep in contact, as the mutual support was very valuable to them. A follow up Cognitive Stimulation session, to be run by Alzheimer’s Society, was offered and accepted but this was to be in 9 months. The Memory Clinic mentioned the Tamworth Memory Cafe and following a chance meeting with Margaret Barnes, a volunteer with the Memory Cafe and Alzheimer’s Society who supplied them with a lot of information about the Cafe, they all decided to come along.

The Memory Cafe is run by Home Instead Senior Care in partnership with The Heart of Tamworth Community Project and is held every Tuesdays at the Sacred Heart Church, Glascote, 10.30 to 12.30, it free but donations are welcome.

The 10 attend every week joining in the group activities and inspiring some new activities (including very popular indoors archery). They find the interaction with the other Cafe users, both the people with dementia and the carers a life line.

Time has gone on and the second course of cognitive stimulation, lead by Sheena Summers of Alzheimer’s Society, was completed with some of the group going on to join the Singing for the Brain group in Lichfield,

This is run by Alzheimer’s Society, singing being an excellent way to stimulate the brain.

The group of ten continue to attend the Cafe. sharing and supporting each other.

Both the Memory Cafe and Singing for the Brain are run by trained personnel and they are supported by many dedicated volunteers.

The group have said: 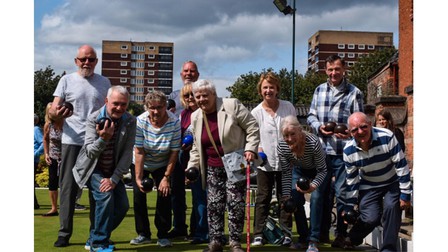