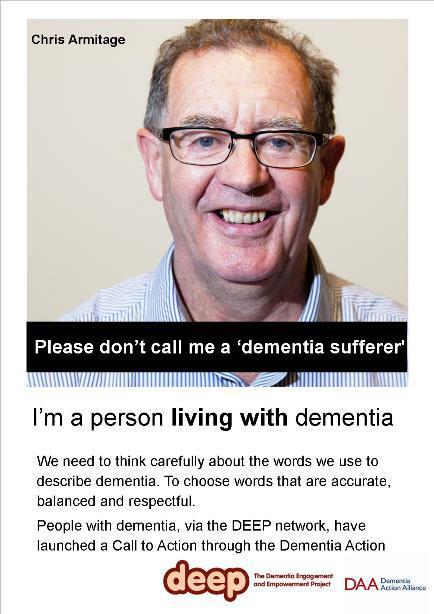 A ‘Call to Action’ from people living with dementia.

“Words are very powerful – they can build you up or put you down. When you are speaking about dementia remember this.” Agnes Houston, person with dementia

Why do we need a Call to Action?

Dementia is discussed more regularly now, in the media - both on television and in newspapers and magazines -and in everyday life. The language we use to talk about dementia influences how people with dementia are viewed and also how we feel about ourselves. We prefer words that are accurate, balanced and respectful.

Many of us have talked about these words at events organised by DEEP. We made a distinction between a) extreme and ‘sensationalist’ language choices and b) language which is accurate in the information it seeks to share.

“Dementia Words Matter” is a DEEP Guide, written by people with dementia, that sets out the words and descriptions of dementia that we would prefer are avoided. We recognise that some quite dramatic words and descriptions can be justifiable when used to create a good story and a sense of urgency. On these occasions we hope that evocative language is used thoughtfully and with consideration.

However, it is the words that we describe as ‘curl up and die words’ that particularly form the basis of this Call to Action. This includes words such as ‘demented’, ‘sufferer’, ‘senile’ and ‘living death’. These are words that make us physically flinch when we hear them, that create stereotypes, and that are negatively attached to the person rather than the condition.

Will you join our ‘Call to Action’?

We recognise that it is going to take collective action to fundamentally change the choice of words that are used to describe dementia and its day to day experiences. We are asking member organisations of the Dementia Action Alliance and others to join us to take action about the use of language associated with dementia. We are really pleased that our guidelines on language have been used to challenge (and change) leading newspapers and television and radio coverage, and we would like to achieve more with your help.

Through this Call to Action we ask you/your organisations to commit to the three ‘C’s:

Challenge words which you recognise as our ‘curl up and die’ words whenever you see or hear them -  in newspapers, on TV, on websites and in conferences and meetings. And pass on the challenge to others to take forward in their own settings. 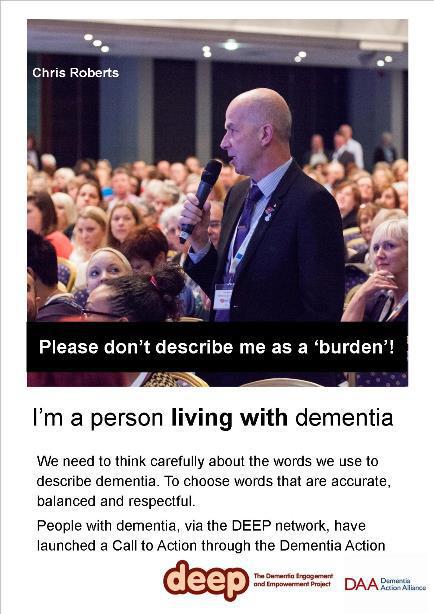 What else will this Call to Action do?

Please use Twitter to spread the word. The hashtag is #dementiawords. 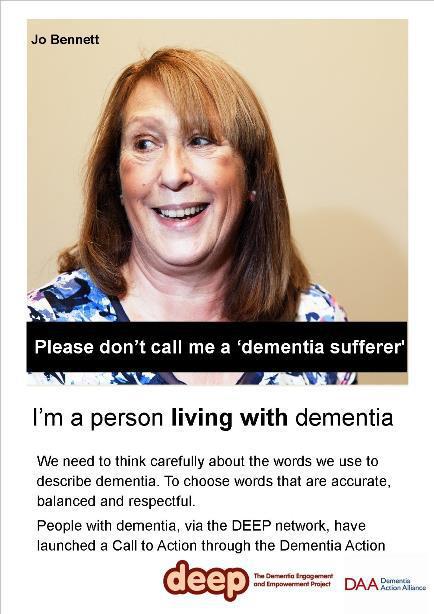